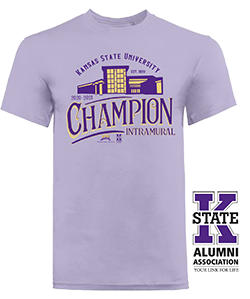 Intramural Champion T-shirts are given as awards. An e-mail notice is sent to winners following each event, and t-shirts may be picked up in the Recreational Services office upon presentation of your K-State ID.

Awards are given to participants in intramural activities who:

Individual sports
There must be a minimum of two individuals or teams participating in any division of an event before an award will be presented to the champion. If less than two compete in a division or open category, the competition will not be held. The individual or team is still eligible for all university competitions or awards.

Meet competition
A participant may win an award for each event won as long as at least two participants are in the event. The winner will also be eligible for any team championship award for that intramural activity.

A team must be comprised of two or more participants. Exceptions: cross country may have five; bowling, golf, 4-on-4 sand volleyball, miniature golf, home run derby, free throw, 3-point shootout, and sports trivia must have four per team.

Team sports
Teams will receive awards only for those on their roster who have participated during that sports season. Participation is designated by their names on the roster within IMLeagues. A forfeited contest will not count as participation.