Chester E. "Chet" Peters was the only individual at Kansas State University to hold the office of Vice President of Student Affairs. He was a native of Minneapolis, Kansas, and a graduate of Valley Falls High School. Peters came to Kansas State as a business student in 1940, went on to letter in football and track, and was a member of several honorary societies. He graduated cum laude in 1947 with a bachelor of science degree after temporarily serving overseas in World War II, advancing from private to captain. He completed his master of science degree from K-State in economics and agricultural economics in 1950. He then received his doctorate in economics, agricultural economics, and administration from the University of Wisconsin in 1953.

Dr. Peters began his career at K-State in 1953 as the assistant dean of the College of Arts and Sciences. He established the first Career Planning and Placement Center on campus. During his tenure, Peters gained the admiration and respect of countless K-State students through his regular administrative duties and numerous hours with Student Government, Blue Key National Honor Society, Athletic Council, Housing Council, Council on Student Affairs, Student Loan Committee, scholarship committees, and the Intramural Council.

Dr. Peters was instrumental in obtaining approval for the construction of this building, which would later be named in his honor. Construction was funded by a student- sponsored bond issue in February of 1976. Groundbreaking took place on January 26, 1979, and the doors opened to the university community on October 3, 1980. The building was dedicated and named in his honor as the Chester E. Peters Recreation Complex on April 27, 1985, preceding his retirement as Vice President of Student Affairs on July 1, 1985. 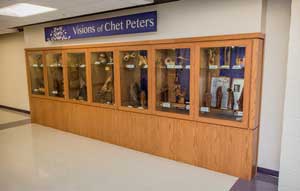 In November of 1991 students voted to expand and renovate the original building, again with student money, and the project was completed in late 1995. Unfortunately, Dr. Peters' untimely death did not allow him to utilize the completed building; he and his wife Doris were fitness advocates and frequent users of the track.

Dr. Peters loved to spend time in his studio where he created wood carvings and sculptures from native and exotic woods. Several of his works can be seen on campus. Two of his sculptures can be seen in the Recreation Complex. The walnut sculpture titled "Achievement" is an individual with uplifted arms signaling victory. It has a forward-looking face, one of achievement for the future. The Recreational Services office is home for the other display titled "Participation is Winning." The outside of the sculpture represents constant improvement through participation. The sculpture's center is filled with carved representations of nutrition, fitness, and sports made from various types of wood.

Dr. Peters will be remembered for being student-centered, compassionate, moral, and highly respected. Students were moved by his warmth, gentle humor, and caring attitude. His ability to extend an understanding of the real meaning of goodness as a human quality is his legacy to learning. Chester E. "Chet" Peters lives on in the Recreation Complex as his spirit lives in the hearts and minds of the thousands who drew inspiration from him.