In November of 1920, the physical education department at Kansas State University began intramurals with 33 men's basketball teams. The program began in Nichols Hall – which was once an athletic facility – that included a pool in the basement level. Within a few years, other sports such as track, baseball, wrestling, swimming, and horseshoes were added. In 1924, women’s intramurals was founded by Geneva Watson and began with dancing and volleyball. Playfields for intramural sports were acquired in 1928, which led to the additions of further sports including women’s field hockey and men’s soccer.

The intramural program continued to thrive through its earlier years until World War II when only seven events were offered. Following the war, intramurals once again began to grow, both in popularity and in events. Intramurals sports included sports like boxing, archery, a posture contest, and handball. 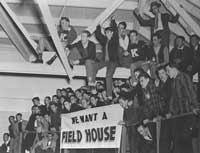 Students passed a referendum in 1948 for a new intramural facility and by 1951; the new Ahearn Field house was completed. More recreational intramural sports were added and activities moved to Ahearn gymnasium.

Expansion continued north of campus as the University added outdoor fields, handball, racquetball, and tennis courts in the late 1960’s. The building of the Natatorium in 1973 expanded fitness programs including aqua fit, intramural swimming, water basketball, and inner tube water polo. Shortly after the completion of the Natatorium, the intramural program became part of the Department of Student Life and was renamed Recreational Services. By the time the program celebrated its 50th Anniversary in 1970, discussions were made to build a larger home for fitness and recreation on campus.

With the effort of Chester E. Peters, Vice President of Student Affairs, K-State became one of the first universities to open a $3.3 million stand-alone student recreation facility in 1980. The facility housed a weight room, 16 racquetball courts, two gyms, indoor running track, and a multipurpose room.

Just 15 years later, students voted to expand again. New strength and training spaces were added and by the early 2000’s personal training, sports clubs, and the challenge course were formed. The students voted to expand the facility once again in 2007 to include additional cardio and weight rooms, an extended indoor running track, multi-activity spaces, lounges, mind and body studios, a climbing wall, and a juice bar.

During this time, the Outdoor Rental Center received a new facility and the outdoor courts were renovated. With the decline in the popularity of racquetball, Recreational Services renovated five of the existing racquetball courts in 2018, creating the Performance Zones, which are a functional training and cross fit space.

Today, K-State Recreational Services continues to strengthen friendships and bonds, and keeps the campus healthy and thriving through physical activity. Recreational Services is committed to creating and growing programs to promote the wellbeing and mental health of its students, staff, and community.